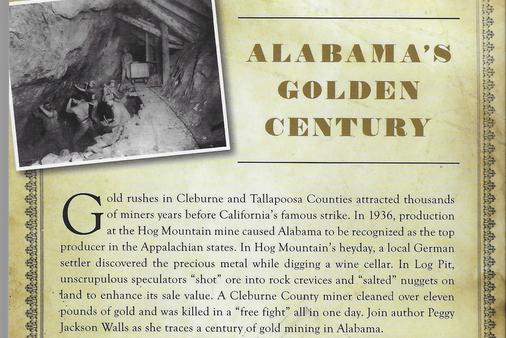 After the gold rushes ended in Alabama, the first in 1835 at Arbacoochee and the second from 1842-1845 in NE Tallapoosa County, miners headed to California, where the 1849 gold rush was in full force. By wagon across the plains and by ship around the tip of South America, the journey was fraught with dangers and challenges, such as land crossings of up to sixty miles through mountains and jungles. Alabama miners were driven with the same desire for gold that motivated them to dig up fields and wade swampy streams back home in Alabama. Because of their experience and expertise in mining, they would be among the leaders in the western gold mining fields.

Among them were James D. Phillips and friends from Devil's Back Bone area in southern Tallapoosa County. When they reached shore in California, they found hundreds of abandoned ships, where crews had jumped board and gone ashore to become a part of the great Gold Rush.

Phillips wrote to his wife back home describing the state of mines...."The rivers have not fallen so low this summer...yet, some few made their pile in a few days and go home but this number is scarce and far between... Provisions are from 25 to 50 cents pd & everything else sells by the pound."

Phillips stayed for three years, accumulating a significant amount of gold as evidenced by his purchases of land when he returned to Tallapoosa County. Thousands of people came from all over the southern Piedmont states. The stories of their experiences in Alabama and other southern Piedmont states were lost to time. With the help of state geological reports and antebellum writers, I recorded a history of gold mining in Alabama,  prior to the California Gold Rush. Beginning in the late 1800s, mining resumed on a small scale, ending due to WWI. In the 1930s, Alabama became recognized as the top gold producer in the southern Appalachian states.

Phillips's story and others are recorded in Alabama Gold, the South's last motherlode.